Sports washing: Cristiano Ronaldo degenerates into an instrument of power 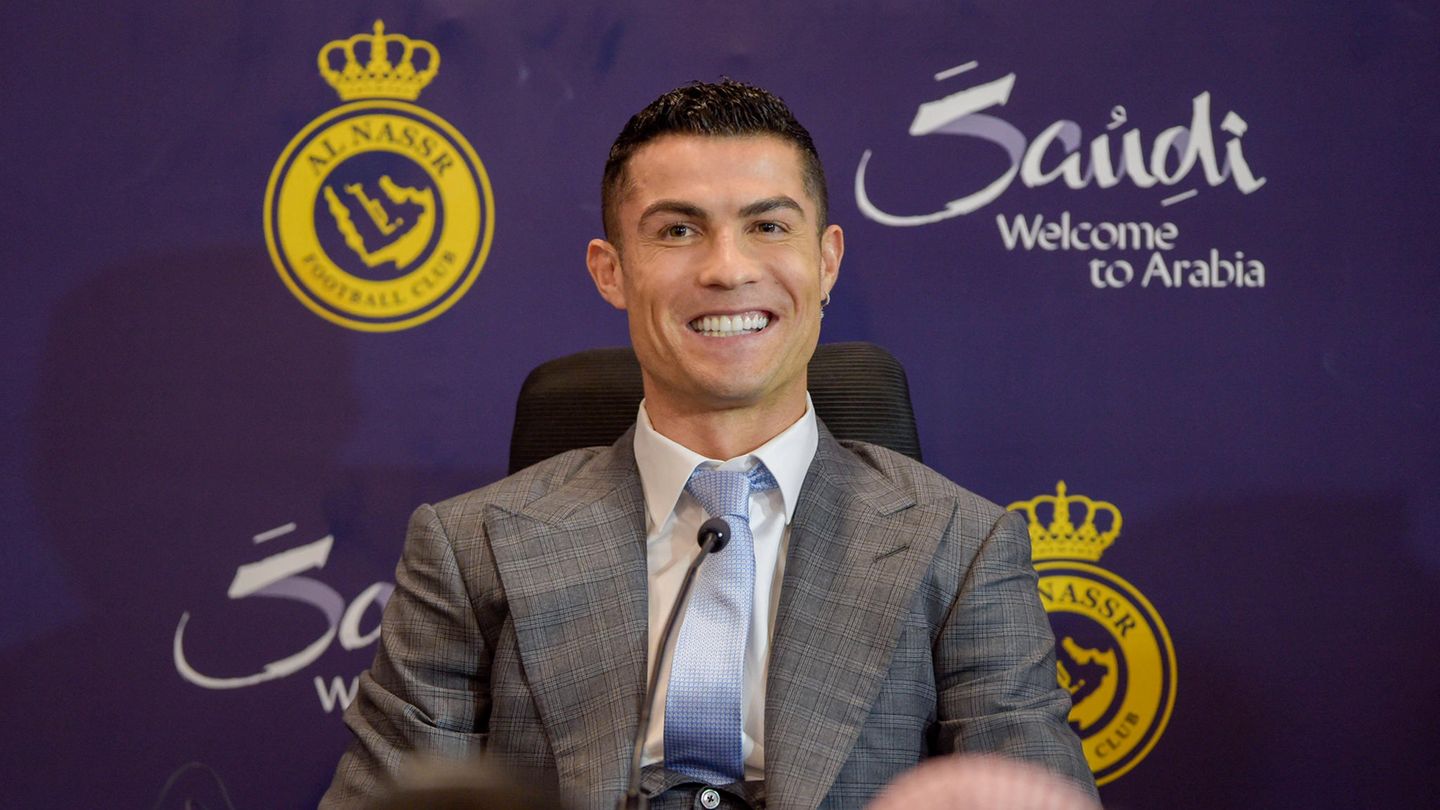 In the wake of Cristiano Ronaldo, legions of aging football stars like Marco Reus are to move from Europe to Saudi Arabia. The rumor mill is boiling over, money is bubbling out of the ground. The race for power in the Gulf is picking up speed. It’s about billions and the future.

This article first appeared on ntv.de

Cristiano Ronaldo continues to settle down comfortably in his new illusory world. The former world-class player is becoming a powerful magnet in Saudi Arabia, drawing the once great names of European football to Riyadh. In the capital of Saudi Arabia, they can make the last few years of their careers at least financially comfortable. In return, they give the desert state their names for the realization of Vision 2030. This is intended to reposition the kingdom with its latent tendency to violate human rights and dismember journalists, free it from its dependence on oil and gas exports and give it a new, friendlier image.

Marco Reus, Sergio Ramos, Eden Hazard, Luka Modrić, N’Golo Kanté and Roberto Firmino: they have all been linked with Al Nassr in the days since Ronaldo’s move to the plateau amid the Saudi desert landscape. The leaders of the Saudi Pro League have transformed within a few weeks into what is possibly the most popular club in world football in their mid- and late thirties and is now being discussed as the alternative offer of the century in contract talks. “It’s quite normal for other clubs to be interested in a player like Marco, whose contract expires in six months,” said Reus consultant Dirk Hebe recently and was certainly happy about the rumors that blossomed before the upcoming contract talks in Dortmund.

The latest rumor sees Barcelona midfield legend Sergio Busquets heading to Riyadh. At 34, Busquets, who retired from the Spanish national team after the World Cup, is also on the home stretch of his career. He will leave the Catalan giants Barça in the summer. So far it has been considered certain that he will then join David Beckham’s MLS project Inter Miami. But the negotiations with the Florida club are dragging on, there is still no agreement. So why not Saudi Arabia, the country where Cristiano Ronaldo now resides in a gigantic bottle opener, the “Four Seasons Hotel” in Riyadh?

Saudi Arabia under pressure after a sleepy start

What at first glance is just an argument in the contract negotiations, at second glance, of course, also represents an Americanization of Saudi football. Just a few years ago, aging footballers were drawn almost exclusively to the US professional league MLS. But less than four years before the North American World Cup in 2026, there are as many world champions under contract as in the Bundesliga (both Leverkusen’s Exequiel Palacacio and Atlanta United’s Thiago Almada remained marginal figures in Qatar). The development of football in the United States has long progressed. Footballers from the European or South American leagues rarely sign there to cash in again. The pensioners’ league has become an established league from which a return to Europe even seems possible.

None of this is an issue for Saudi Arabia for the time being. They just want to shine and entertain the world and their own population, which is 70 percent under 35 to 70 percent, with Cristiano Ronaldo. Which they have managed respectably for the moment. The club’s Instagram account has already grown by more than ten million followers to more than eleven million since Ronaldo signed at the end of December, and the Arabic-language Twitter account has almost reached Borussia Dortmund’s 4.3 million followers with 3.8 million followers. Little known outside of Asia, the club have quickly put themselves on the map of world football, if not for sporting reasons.

“Saudi Arabia realized a few years ago that it takes more than just hard power, that is, military and political resources, to be a powerful nation internationally,” Danyel Reiche, a visiting scholar at Georgetown University Qatar, recently told CNN : “You also have to invest in soft power. Qatar shows that this can work quite well.” Saudi Arabia’s little neighbor has been securing its existence through sporting events for a good quarter of a century and was able to save itself from the blockade initiated by the Kingdom of Saudi Arabia in the mid-2010s.

The 2022 Winter World Cup was the protective shield of the emirate, which had long been closely interwoven with international politics. With the end of the tournament, which was ultimately only controversial in Europe and the USA, some Qataris fell into “post-World Cup depression”, according to local news site Doha News. Others threw themselves into the preparations for the planned Olympic bid in 2036. In the long term, Qatar is supposed to become the sports capital of the world. And at the same time continue to build your own empire in world football. Like the City Football Group, which is majority-owned by the ruling family of the Arab Emirate of Abu Dhabi, with flagship Manchester City and MLS club New York City FC, Qatar is also aiming for long-term dominance in club football.

Nasser al-Khelaifi, president and leader of the Messi club Paris Saint-Germain, is said to be aiming for a minority stake in at least one English Premier League club with his Qatar Sports Investment (QSI). Tottenham Hotspur, Liverpool FC and Manchester United are shortlisted. In the last twelve years, Al-Khelaifi has been able to build up a home power at Uefa, the European football union. Meanwhile, Bayern Munich is currently negotiating a new, high-paying contract with Qatar Airways. The advertising deal met with great resistance from the fans of the record champions, but the arguments never got through to the top of the club. The emirate’s other investments include prestigious horse racing events in England and France, investments in the sport of cricket and of course hosting the Athletics and Handball World Championships in the 2010s.

Lots of world championships, Olympic ambitions, football clubs, horse racing: Saudi Arabia is far from that far. But following the example of its small neighbor, the kingdom now also wants to use sport as a geopolitical instrument. After the first big investment in the traditional English club Newcastle United, they are now luring the stars directly into the desert, also to give emphasis to their efforts for the 2030 World Cup. With Ronaldo and the signing of Lionel Messi as the Kingdom’s off-pitch ambassador, the two defining figures of last-generation world football are contractually tied to Saudi Arabia.

What the Kingdom is hoping for from the 2030 World Cup

The World Cup victory and Messi’s ultimate legend in Qatar, the state that provides much of his livelihood through Paris Saint-Germain, have made the Argentine even more valuable. In this post-World Cup January, Saudi Arabia is the center of the football star world anyway. Messi and Ronaldo will have a last show duel on the pitch in a few days and the Spanish league will fly in their stars for the Supercup. German world champion Toni Kroos will also be there with Real Madrid. He shouldn’t care about the lack of rights of the LGBTQI community. Before the World Cup he had criticized Qatar for it. A complex world through which footballers have to navigate and in which they sometimes lose track.

At the moment, the joint bid with Egypt and Greece is nothing more than a very concrete rumor that was fueled by the all-powerful FIFA President Gianni Infantino during the World Cup. He not only liked to show himself together with Crown Prince Mohammed bin Salman, but also hinted at further World Championships in winter at his final press conference – a mandatory requirement for another desert World Cup. A World Cup that some observers expect could take place exclusively in Saudi Arabia and not in Greece and Egypt as well. Such a global event would also give the closed and ultra-conservative kingdom a new image.

How Ronaldo became an actor

Like Qatar, Saudi Arabia is not primarily about sport. In addition to diversification and sports washing, the country is also concerned with positioning itself as the sports stronghold par excellence in the Gulf region compared to Qatar or the equally highly ambitious United Arab Emirates. Football and the rather bizarre Asian Winter Games planned for 2029 near the still-nascent desert skyscraper city of Neom are building blocks of this strategy. In addition, the kingdom has made a name for itself in recent years with the heavyweight world championship in boxing between Andy Ruiz Jr and Anthony Joshua and the LIV Golf International Series, which has been criticized as a “blood money tour” because it is worth millions. As in any other self-respecting Gulf state – Qatar, the UAE and Bahrain – the Formula 1 circus also makes a stop in the country.

All of this is part of a development that is increasingly alienating sport, and of course football in the first place, from the core of what is happening on the pitch. “Calling Ronaldo the highest paid footballer in the world is like calling Tom Cruise the highest paid fighter pilot in the world,” wrote the Guardian this week: “It needs a reality check. Ronaldo isn’t involved in sport anymore. He is an actor, a public amplifier, an instrument of power.” All of this could already be observed at the World Cup in Qatar. Even there, the eight hundred times goalscorer was no more than a much acclaimed professional soccer actor. Was he one who had long since left football behind but still wowed the masses – the perfect candidate for the new pig world of football that leads straight into the geopolitical chasms of the Gulf.