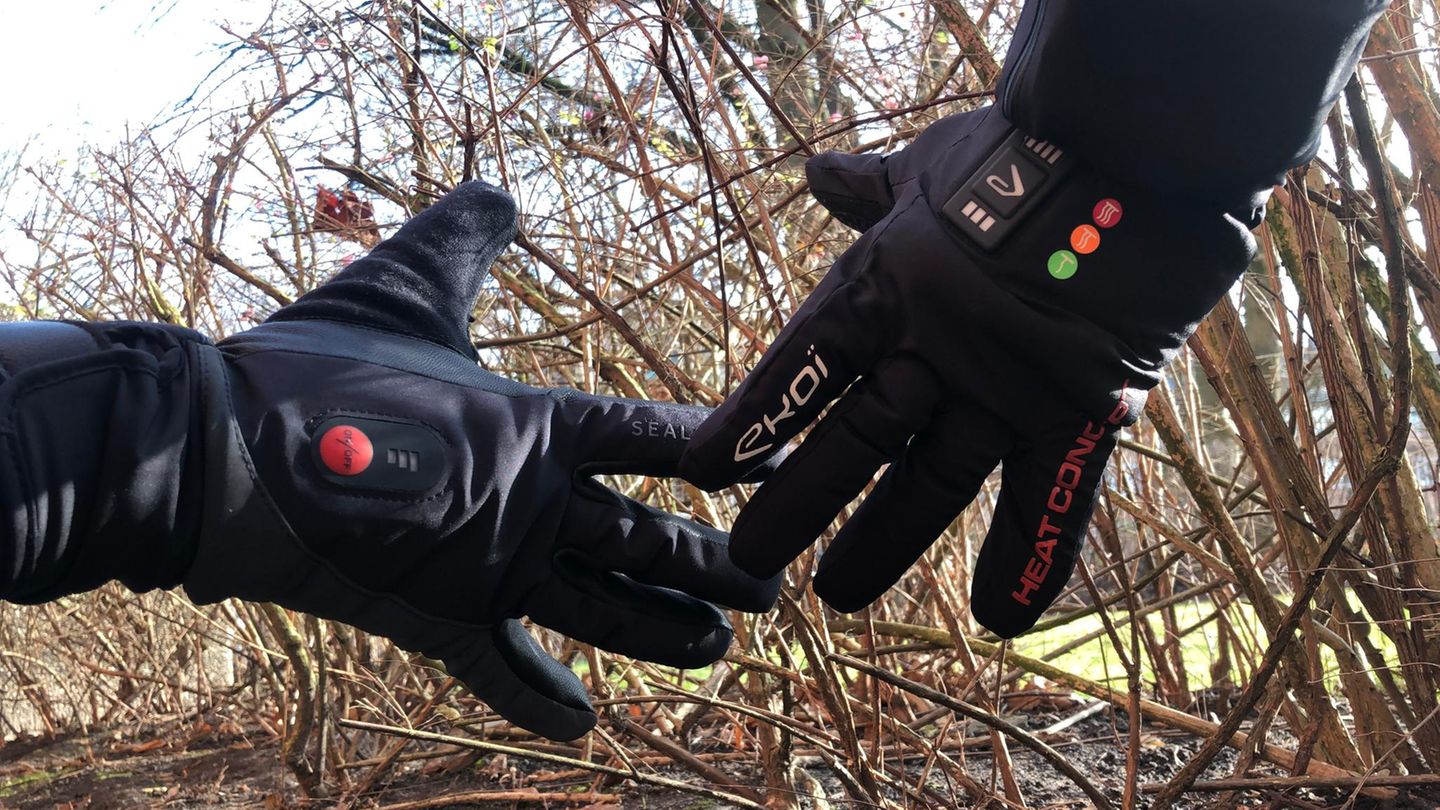 Gloves are a great invention. Unfortunately, even the thickest models reach their limits in icy sub-zero temperatures. Then only pocket warmers will help. That’s not true. Ever heard of heated gloves? the star took a close look at two models.

Even if the really big snowfall is still a long time coming in many ski areas: millions of Germans are looking forward to their winter holidays. And before you start, it’s worth taking a look in your closet. Fits. Doesn’t fit anymore. Fits. Don’t like it anymore A small inventory makes sense in any case, so that there is still some time to get dressed for the ski holidays. If you still haven’t found the ultimate winter gloves for cold hands despite a long search and many tests, you’ve come to the right place. Heated gloves should keep your fingers warm when cycling in winter, but also on skiing holidays. But how does that work? And how quickly do the batteries die? Is the good old one in the end the better heater for on the go? We grabbed two models for a test.

Sealskinz vs. Ekoi: The first impression

At first glance it comes a little sportier and more suitable for bicycles. the would also pass as a ski glove from a purely visual point of view. This is mainly due to the generous shaft, which can even be tied to the forearm with a rubber cord. This has some advantages. But more on that later. Sealskinz does without the protruding shaft, which looks a bit more elegant. Instead, the palms and fingers are made of soft leather. The rest also makes a high-quality impression. The glove should be 100% waterproof. Ekoi omits the leather. A rubberized pad sewn onto the palm of the hand is intended to improve grip on the handlebars (or ski pole).

The manufacturers placed the most important feature of the two test products roughly in the middle near the thumb on the back of the glove. Sealskinz’ heating button is designed a little more discreetly. In addition to a printed colored legend in green, orange and red and corresponding LEDs, Ekoi also scores with a charge level indicator. On the competitor, the lamps light up red in all heat settings. This means: the number of illuminated bars indicates the set heat setting.

Both gloves are supplied with two separately packed batteries. The packs from Ekoi (65x42x15 mm) are grey, angular and bulkier than the slightly flatter energy storage from Sealskinz (60x47x13 mm). The chargers are also included. With Ekoi, the power pack with plug is included. Sealskinz only provides the two-part cable with the 2.5 millimeter jack plug. However, the right adapter should now be found in every household. Nice: Both are equipped with an LED that lights up green as soon as the batteries are fully charged. This took a few hours with the apparently only partially charged batteries of the test models. Only then were they ready for use.

Ekoi vs. Sealskinz: The most important information at a glance

First of all: Both tested pairs of gloves can be worn comfortably even without batteries. We tried them out on the bike in temperatures just above zero degrees. Sealskinz did a little better here. Mainly because the lining of the Ekoi model on our fingers was too thick. Although the brake levers and gear lever could still be operated safely, we felt that control was noticeably more direct with the Sealskinz gloves. We still got cold fingers after half an hour in the Hamburg winter. Which brings us to the batteries.

For practical reasons, both manufacturers hide the batteries in the shaft of their gloves. In the small pouch you will find a short cable with a 2.5 millimeter jack. So far so identical. Because that was it with the similarities. Namely, Ekoi chose to hide its batteries in a pocket on top of the shaft. The small zipper runs lengthways for us and is closed from the wrist towards the arm. Sealskinz, on the other hand, has placed its elastic, yet somewhat tightly dimensioned, battery compartment on the underside of the hand. In addition, the zipper runs across the wrist. Plugging in the batteries only took a few seconds. There was also nothing to complain about when storing the solid 2200 mAh Li-polymer power pack. Worth mentioning: The slightly flatter Sealskinz packs only fit across the compartments. There is not much space for the cable and plug. With a bit of tact and routine, however, the batteries slide into the intended place. The bulky batteries for the heated gloves from Ekoi are stored much more comfortably. Longitudinal or transverse does not matter. We couldn’t find out in the test that they are therefore flapping around in the bag.

Sealskinz vs. Ekoi: The Fitting Room

When putting it on, it quickly became clear which idea was more practical. While the hands of the Ekoi model slipped easily through the elastic cuffs despite the batteries, the sporty Sealskinz shaft turned out to be more of a problem. And from our point of view, that has to do with the unfavorably stowed battery. Only with a lot of effort and fumbling did the second glove finally sit where it belonged. It is difficult to judge whether the scope would have been more generous with size L instead of M. However, the gloves fit perfectly on the fingers. The fit of the Ekoi Heat Concept 5 was also right. In our opinion, the generously dimensioned shaft and the drawstring are the better solution. In addition, the glove can be closed on the forearm with the drawstring so that the heat stays where it should. The Velcro closure on the wrist of the Sealskinz heated glove is difficult to close. Here, too, the battery gets in the way.

Ekoi specifies 5 guide values ​​of 25, 30 and 35ºC for the three heating levels of the Heat Concept. Sealskinz does not provide temperature information and promises a runtime of 5-6 hours. You don’t find out how warm it is inside the glove during this time and for which heating level this applies.

To find out, we misused a classic roasting thermometer. For the test, the two tips of the temperature sensor were pushed into the middle and ring fingers of the gloves from below. In both models about to the middle of the finger. The batteries were fully charged. We initially carried out this test at a room temperature of around 20ºC. Ekoi effortlessly achieved the values ​​indicated on the packaging. After half an hour the thermometer showed a whopping 47 degrees Celsius. In our test, the heating elements in the Sealskinz glove reached 43 degrees Celsius after 30 minutes. And here are all the other readings from the first small series of tests:

Both manufacturers recommend preheating the gloves for a few minutes at the highest heat setting before using them outdoors. In another test, we tried whether that works, how warm it gets in the gloves and after how long the battery runs flat. This time in the fresh air at a temperature of around 2 degrees Celsius. The most important finding: Both models heat up the interior to 35 degrees Celsius within ten minutes at heat level 3. After an hour of full power, they still warm your hands with a cozy 38 (Sealskinz) and 35 degrees Celsius (Ekoi). These are the complete measurement results:

Measurement results at 2ºC outside temperature

First of all, you can say that both heated gloves do what they are supposed to do. To keep your fingers warm. At the highest heat level, the batteries in the Sealskinz and Ekoi last at least two hours, with the Sealskinz packs showing a little more endurance in our test. Both models are visually appealing and of high quality. One a little more elegant, the other a little wintry. In the practical test we liked it a little better. It was easier to put on and close. At the the shaft seemed a bit too tight overall. With a sports watch on your arm, getting dressed was a small feat. On the other hand, Sealskinz scored plus points in the cycling test. Here we felt safer thanks to the integrated leather on the inside of the gloves on the brakes and gears. That’s why we recommend this model for the way to work or short bike trips on winter weekends. The Ekoi finger heater is also suitable for toboggan tours and particularly cold days on a skiing holiday.