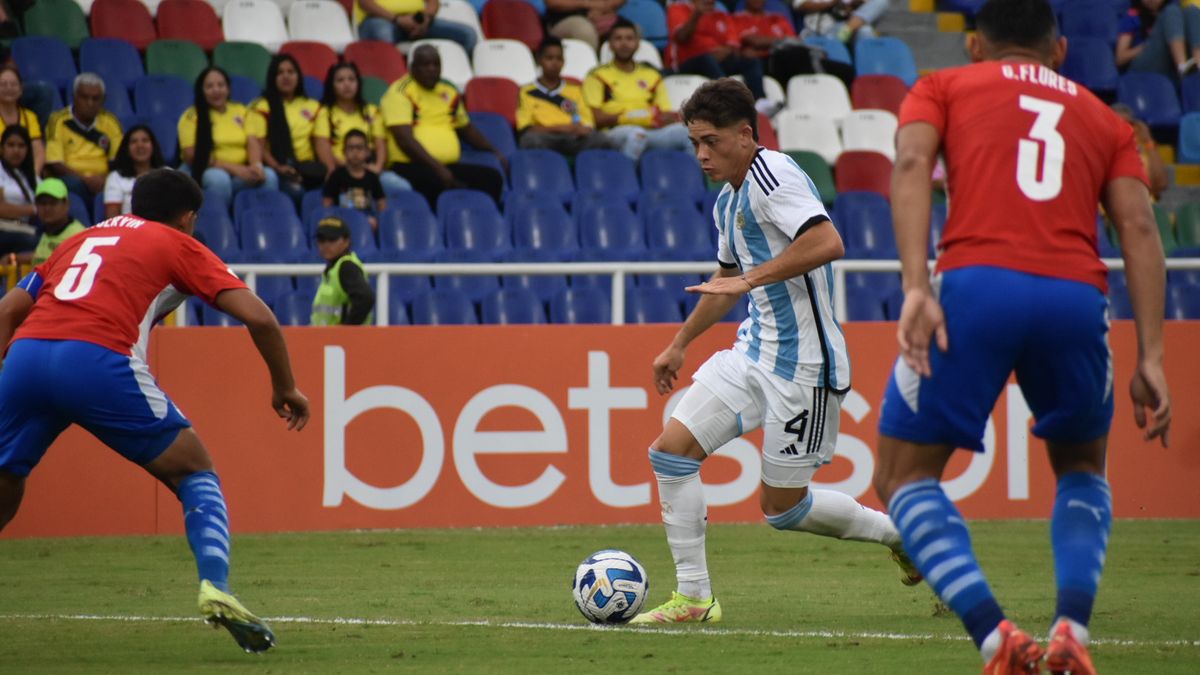 A mistake by goalkeeper Federico Gomes Gerth, sparring at the World Cup in Qatar, and a penalty caused by the Boca defender Luciano Di Lollo made it possible for the Guaraní victory with goals from Gilberto Flores (31m.PT) and Allan Wlk (10m.ST) in the Pascual Guerrero stadium in Cali.

The team led by Javier Mascherano, who officially debuted the shirt of the three world starstied temporarily after 33 minutes of the initial part through Maximo Perronerecent acquisition of English Manchester City.

Argentina, free on the first date of Group A, will play again next Monday at 9:30 p.m. against Brazil on the third day of a zone completed by Colombia and Peru, who later faced each other on the same stage.

The Argentine number 10 Facundo Buonanotte, a brand new Brighton footballer, left the field on a stretcher and with a neck brace after falling abruptly on his back in the dispute of a divided ball. The health personnel of the stadium transferred by ambulance to a medical center to carry out preventive studies.

The South American of Colombia will classify the first 4 selected for the World Cup, to be held from May 20 to June 11, and the best three for the 2023 Pan American Games, scheduled from October 20 to November 5.

The tickets will be decided in the Final Hexagonal, to which the first three placed in each group advanced.

Argentina’s partial disadvantage in the first half was not related to the development of the game, it was only explained by a combination of errors in an unfortunate play.

Perrone ignored a ball against the band, confident in his departure, and Gomes Gerth then offered a slight resistance, without putting his body behind his hands, before a commitment shot by Flores, forced to end the action due to a lack of receivers .

The positive of the 0-1 was that the Argentine boys were activated as had not happened in the initial half hour, in which they maintained their dominant position on the field but without creating danger over the fence of Ángel González.

The team’s reaction after the goal came immediately and gave revenge to Perrone, who started and finished a play at the mouth of the goal, after a discharge with Santiago Castro from the left sector.

On that wing, the Vélez striker had good meetings with the winger Julián Aude and also with the City footballer, one of the three internal midfielders in the 4-3-3 scheme that the Argentine coach arranged.

On the right, also with promising interventions, was the Real Madrid footballer Nicolás Paz, an elegant left-footed player with the whole field in his head, who was already called up by Lionel Scaloni to the senior team for the last date of the Qatar Qualifiers 2022.

Everything got complicated again for Argentina at the beginning of the second half when the team threatened to take their rival ahead. After a frank header from Castro that could mean the second, Paraguay found themselves with a penalty in their favor due to a redhanded handball from Lautaro Di Lollo.

A perfect execution by Wlk left Gomes Gerth without a chance and presented Paraguay with the desired scenario: an advanced and open opponent in the background.

In the search for equality, Mascherano disarmed the line of 4 defenders and put together a poker of forwards with the entry of Julián Fernández for Aude. Buonanotte also entered, one of the figures of the squad, who filled the coaching staff with concern about his withdrawal by ambulance when the changes were already exhausted.

Argentina tried all the ways until the end, at times with concept, at others with more heart, but could not break the last champion of the Odesur Games, who buckled in the final meters of the field and celebrated his first victory in the South American.

Argentina vs Paraguay for the South American Sub 20

Changes in the second half: 14m. Facundo Buonanotte for Peace (A); 15 m. Axel Alfonzo for Cantero (P); 21m. Julián Fernández for Aude and Brian Aguirre for Vallejo (A); 30m. Víctor Quintana for Gauto, César Olmedo for Wlk and Luis Rolón for Leonardo Rolón (P); 37m. Maximiliano González for Infantino and Ignacio Maestro Puch for Castro (A) and 40m. Kevin Pereira for Segovia (P).