NFL: Super Bowl – These four teams are battling it out for game of the year 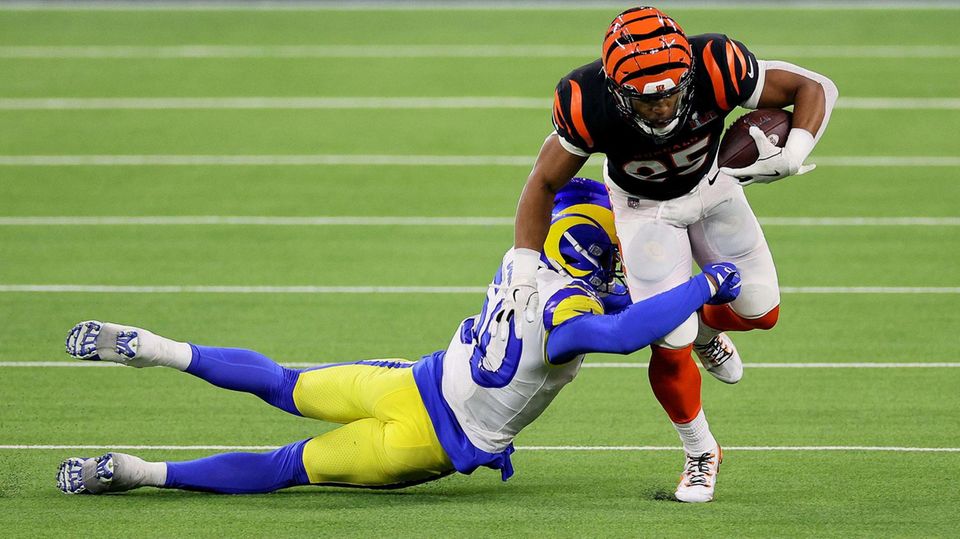 One win before entering the Super Bowl – and the last two games before the most important game in American football promise a lot. In Kansas City there is another big duel between the Chiefs and their nemesis Cincinnati Bengals, before the Philadelphia Eagles will receive the San Francisco 49ers next Sunday. What’s being talked about this week:

Patrick Mahomes and the ankle

Chiefs fans feared the worst when quarterback Patrick Mahomes grimaced in pain in the first quarter of the 27-20 win over the Jacksonville Jaguars. Knee over? Ruptured ankle ligaments? But it’s just a sprained ankle, US media reported on Sunday. Mahomes continued to play in the second half and looks set to play in the AFC finals against the Bengals. How fit will he be? Will he be as dangerous as a ball carrier as the fans know him? The week will be long – and it may not be long enough for the injury to subside sufficiently.

Watch the video: football coach explains the rules of the game and the Super Bowl.

Bills or Chiefs – even the NFL has given the impression over the past few days that anything other than a duel between these two teams for victory in the AFC and entry into the Super Bowl is unimaginable. Tickets for the expected duel have already been sold – and explain the saying of Bengals quarterback Joe Burrow after the clear 27:10 on Sunday: “You better take care of the refund,” he said and grinned. Last season, the Bengals were the terminus for the Chiefs, instead of Kansas City, Cincinnati was in the Super Bowl (and lost to the Los Angeles Rams). The team also won the main round in early December. The Chiefs may be favorites in the eyes of many experts, but nobody should call the Bengals outsiders. “It’s going to be fun. Two of the top guys in the league, two of the top teams, it’s going to be exciting and I’m looking forward to it,” Burrow said.

At the beginning of December, when the San Francisco 49ers played the Miami Dolphins, a man suddenly had to appear that even the season ticket holders probably didn’t know: Brock Purdy, the last young player selected in the draft last spring. Traditional nickname: “Mister Irrelevant”. And the? Lead the 49ers to victory and then never stop. Not even in the playoffs. First against the Seattle Seahawks, now against the Dallas Cowboys. A real football fairy tale that needs a win against the Philadelphia Eagles for the really big happy ending. And then the triumph in the Super Bowl on February 12 in Arizona.

The Eagles are who again

Before this season, no one really had the Philadelphia Eagles on their radar as a candidate for victory in the Super Bowl – there were too many question marks around quarterback Jalen Hurts’ team, who himself caused some unrest among fans after the mixed end of the season before. But the young playmaker led his team to the best haul in the NFL main round, so the Eagles hosted the NFL finals against the 49ers on Sunday and have home field advantage. The New York Giants were also no obstacle on Saturday and went down with 7:38. Hurts looked fresh despite his recently injured shoulder and makes all Eagles supporters dream of their first Super Bowl victory since 2018.

Davis Cup: Argentina lost the series with Finland after the defeat of Bagnis in the fourth point