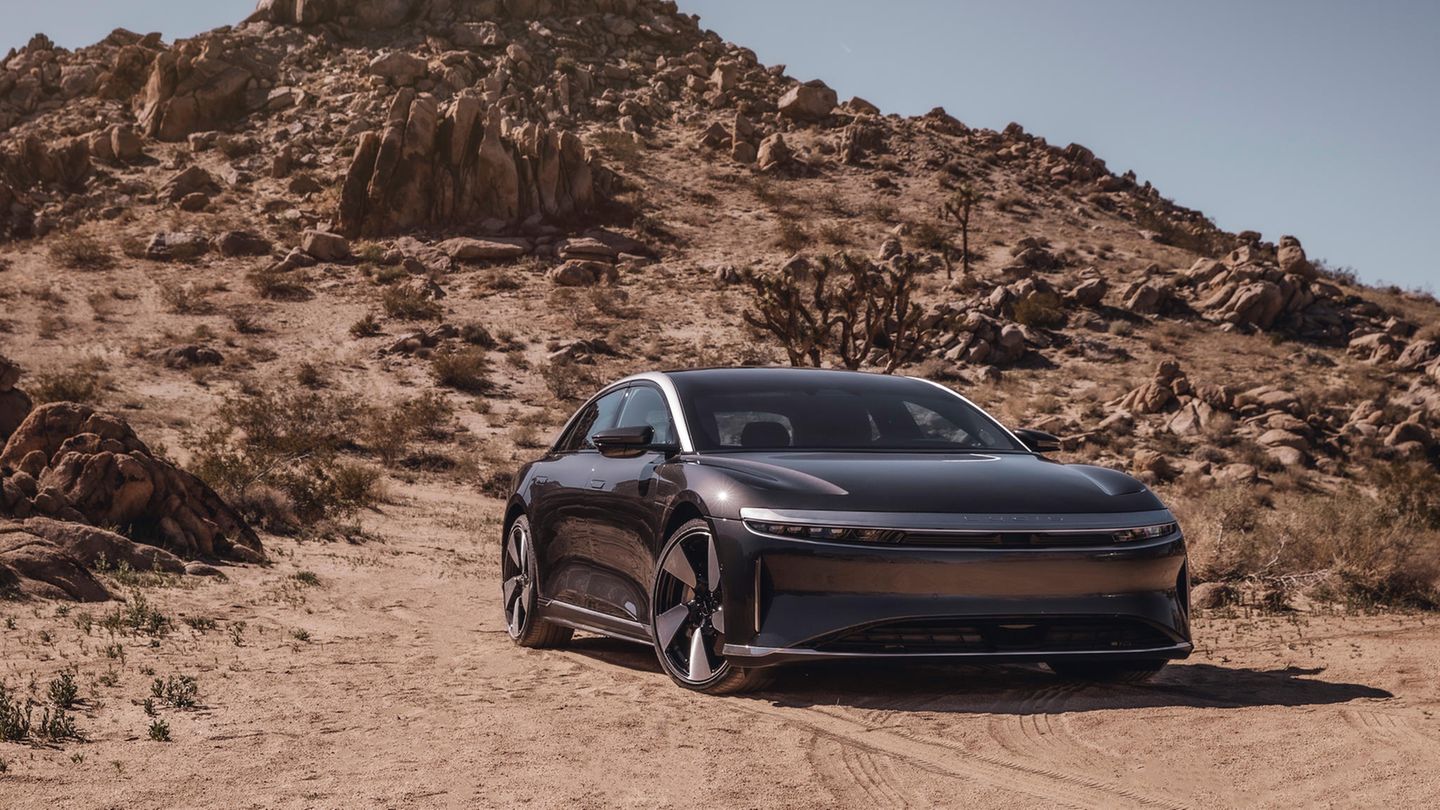 The US carmaker Lucid is bringing its first electric car onto the market, the Lucid Air. The luxury sedan is to appear with over 1000 hp, a remarkable charging speed and the latest technology – the hunt for Tesla begins, albeit with hurdles.

Lucid is in the starting blocks. The US automaker plans to open its first retail store in Europe, a showroom in Munich, on Friday, May 13. To this end, the company is entering its first electric car, the Lucid Air.

With up to 1111 hp, acceleration from 0 to 100 in 2.5 seconds and an expected range of up to 845 kilometers, “the fastest charging electric vehicle in the world”, as the manufacturer promises, is intended to stir up the automotive market. The luxury sedan is intended to compete with the luxury cars from BMW, Mercedes and Audi – but above all with the Model S from Tesla. In fact, according to the manufacturer, the Lucid Air accelerates slightly faster than the Taycan, the most powerful Porsche, but does not quite reach the specified performance of the Model S Plaid (1020 hp and acceleration from 0 to 100 km/h in 2.1 seconds).

With a 900 V charging system and a significant charging capacity of 300 kW, the Lucid Air is ahead of the Porsche Taycan, which works with 800 volt technology. Tesla only has a 400 volt architecture. In addition, the Lucid Air should be able to charge electricity for a range of 400 kilometers in 15 minutes. At 0.21, the cd value roughly corresponds to the competition from Tesla.

Coated windows and an aluminum vehicle frame, which not only saves weight but also protects the occupants in the event of an accident, should also be noticeable in the range. In addition, the sedan should convince with the latest technology. Inside there is a glass cockpit display with 34 inches and 5K. Face recognition and Alexa-enabled voice control are also installed. The vehicle has a total of 32 sensors, including camera, radar and ultrasound technology as well as lidar, which are intended to make the functions for semi-autonomous driving possible. Bidirectional charging, in which energy from the battery is fed back into the power grid, is to follow.

With a length of almost five meters and a width of around two meters, the “luxury sedan” has a wheelbase of almost three meters. That’s almost as good as in a Mercedes S-Class. In addition, the Lucid Air appears with a large trunk volume of 456 liters and another 202 liters in the frunk, the front storage space.

Lucid Air: A serious challenge to Tesla and Co.

The Lucid Air is definitely a challenge that competitors like Tesla should take seriously. Lucid boss Peter Rawlinson was once the chief engineer at Tesla and was involved in the development of the Model S. So hardly anyone should know the Tesla sedan better than he does. And indeed: “A lot is reminiscent of Tesla,” says Stefan Bratzel, Director of the Center of Automotive Management, the “Handelsblatt”. According to Bratzel, Lucid’s innovations are impressive. The car expert also makes it clear to the daily newspaper: “Expand production and sales network, get the service right – this is not a children’s birthday party.”

Because while Tesla had hardly any competition when it started, things are different today. And Lucid is struggling with production issues anyway; the car manufacturer has only produced a few hundred vehicles so far – instead of 20,000, the original production target. By the end of 2022, the carmaker still wants to build a total of 12,000 to 14,000 cars. The production target is supported by the Kingdom of Saudi Arabia: It recently placed a large order for 100,000 vehicles for the next ten years. Previously, an investment by the Saudi sovereign wealth fund had entered Lucid in the summer of 2018 with over a billion dollars.

Introductory variants for over 200,000 euros

So the Lucid Air should fix it. In the USA, the market launch took place with the introductory variants Lucid Air Dream Edition P and Lucid Air Dream Edition R, which were limited to 520 units. The former has 1111 hp. The second is aimed at frequent drivers with an estimated range of 900 kilometers. The two introductory variants will be offered to a small number of customers in Germany, the Netherlands, Norway and Switzerland who have reserved the models. The purchase price for the two model variants in Germany is 218,000 euros, over 90,000 euros more than a comparable Tesla Model S Plaid.

By the end of the year, Lucid plans to deliver the three model versions Air Pure with 480 hp, Air Touring with 620 hp and Air Grand Touring with 800 hp. What the Lucid Air will cost is not yet known. The Lucid Air Pure should be around 100,000 euros in Germany and the Netherlands. The carmaker plans to announce prices later this year.

Reservations are already possible in numerous European countries. For this, customers have to pay 300 euros for the Air Pure and 900 euros for the Air Touring or the Air Grand Touring. Following the opening of the store in Munich, Lucid plans to open additional locations in Germany, the Netherlands, Norway and Switzerland this year.