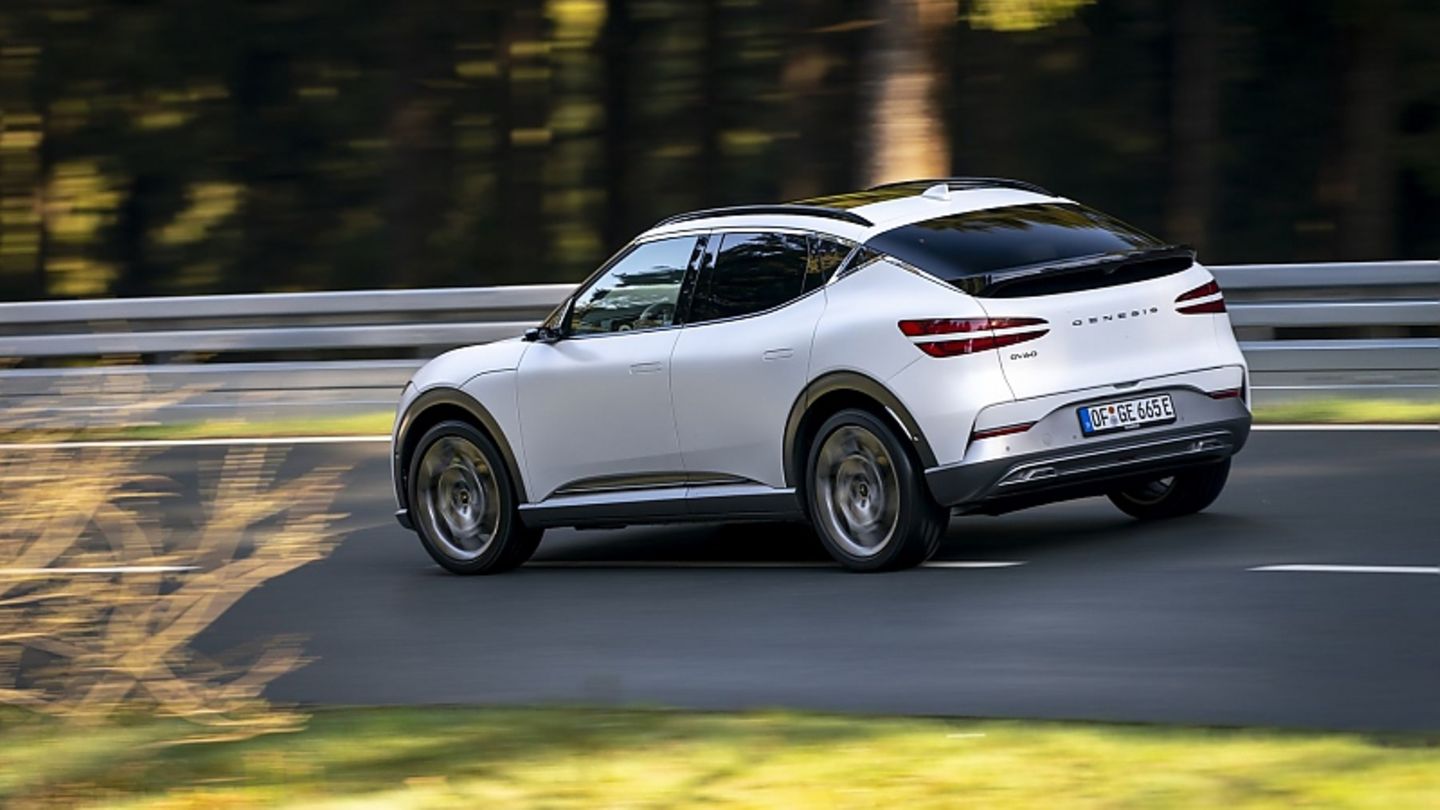 After the Kia EV6 and the Hyundai Ioniq 5, the Korean engine manufacturer is launching the Genesis GV60, the third electric vehicle based on the E-GMP platform. The e-crossover cuts a fine figure just like the two technology brothers.

Showmanship is part of the car manufacturers today. Starting with the headlights and rear lights of a car, which mutate into a light organ, through the ambient lighting to complex infotainment menus. Now even the otherwise rather sober Koreans are putting on the big show. As soon as you activate the Genesis GV60, the ball in the center console rotates 180 degrees and releases the automatic control buttons. Of course, the Crystal Sphere (yes, there are marketing word acrobats in South Korea too) is a gimmick, superfluous if you take it seriously, but we like the little spectacle even at the tenth performance. Only one question concerns us: What actually happens when the mechanism goes on strike?

More on that later. We are now going to focus on the interior, which is much more attractive than the plastic ambience of the VW ID.4 GTX, which is painstakingly laminated with leather. However, since Genesis sees itself as a premium brand, the Audi Q4 50 e-tron quattro is more of a competitor. But the interior of the Genesis GV60 is also impressive in comparison to the premium electric car from Ingolstadt. Fine leather and charming little things like the fact that the applications in the doors are colour-coordinated and the coat hooks are made of solid chrome-plated metal.

The display concept of the Genesis GV60 is different than that of the Audi. With the Korean, both the cockpit and the infotainment touchscreen measure 12.3 inches. Big cinema. In the Audi Q4 e-tron, the cockpit consists of a cell phone-sized screen behind the steering wheel, but instead an XXL head-up display that throws flying arrows onto the road in front of the driver. On the GV60, the windshield display is conventional, but still manageable. You can tell that the Asian technicians can’t get out of their skin when you want to adjust the height of the HUD. Instead of the catchy and clear “height” you adjust the display like a coordinate system on the “Y-axis”.

The displays of the virtual instrument panel are clear and, if desired, also classic with round instruments, which we like best. Since the Korean designers were allowed to act on a long leash with the compact Genesis crossover, you can display the car in the color of the paintwork in the infotainment menus. The service is catchy. You simply swipe through the tiles and select the corresponding menu item by touch. But why there are two different points of contact for connecting to the smartphone is not clear to us. So you connect the smartphone via Apple CarPlay or Android Auto under one point, but not wirelessly, which surprises us somewhat given the obsession with technology of the Genesis engineers, and the traditional Bluetooth connection under another. It would be better to combine both options under “Telephone”.

The Genesis GV60 is based on the E-GMP (Electric-Global Modular Platform) architecture of the Hyundai Motor Corporation and thus shares the technology with the Hyundai Ioniq 5 and the Kia EV6. This also means 800-volt charging technology and therefore faster charging than is possible with the 400-volt variant of the Audi Q4 e-tron. So the 77.4 kilowatt hour battery is filled from 10 to 80 percent in 18 minutes on a 350 kW fast charger. If the electricity filling station manages 50 kW, it takes 73 minutes and on an 11 kW wall box from 10 to 100 percent 7 hours 20 minutes. When connected to an AC household socket, the batteries are fully charged again after 34:20 hours.

The Genesis GV60 is only available with four-wheel drive but in two versions. In the sports version it is 160 KW / 218 PS at the rear and 74 kW / 100 PS at the front (together 234 kW / 318 PS). In the Sport Plus model that we drove, both axles are equipped with the 160 kW / 218 PS electric motor, which leads to a system output of 320 kW / 435 PS, which on the GV60 Sport Plus can be boosted using the boost button on the steering wheel can be increased by 20 KW / 37 PS per motor to 360 kW / 490 PS for ten seconds. Despite the E-SUV’s weight of 2,145 kilograms, it offers more than decent driving performance: After four seconds, this GV60 breaks the 100 km/h mark and continues to roar up to 235 km/h. Due to the high-speed motors, the E-Crossover can do this with an automatic input. Basically, the GV60 is a rear-wheel drive vehicle equipped with an electronic differential (E-LSD). The front axle is switched on at lightning speed only when required. Because of this concept, the Korean e-crossover also features a fun drift mode. You activate it by setting the automatic to “P”, deactivating the ESP in sport mode and simultaneously pulling on both steering wheel paddles for three seconds. While driving, you set the strength of the recuperation with the two paddles or leave the system in automatic mode. The powertrain acts noticeably differently in the three driving modes Eco, Comfort and Sport, but even in Eco, where things are initially comparatively reserved, the two motors play their power when you press the accelerator pedal, which can definitely be safety-relevant.

For all its sportiness, the Genesis GV60 is tuned rather comfortably, without the chassis being completely decoupled and so there is no synthetic driving experience. Despite the 21-inch wheels, the adaptive chassis handles the unevenness of the road surface with ease, even in the Sport program, without annoying teetering and without excessive hardness. The steering doesn’t necessarily compete with that of the Porsche Taycan either, but provides enough feedback that you can really let the GV60 fly. We are pleased to note that the side bolsters of the seats inflate if necessary and provide additional lateral support. Our test car was equipped with the optional digital exterior mirrors (cost 1,460 euros extra), which work well in combination with the monitors in the doors, including distance lines and the blind spot assistant. They are not really necessary.

This and other equipment details drive up the price of the Genesis GV60 Sport Plus test car from 71,010 euros to a whopping 84,730 euros. Significantly more than the entry-level price of the Audi Q4 50 e-tron quattro, which costs at least 53,600 euros, on which the sports variant of the GV60 (56,370 euros) is based. Genesis specifies a range of 466 kilometers for the GV60 Sport Plus, with us the on-board computer showed 333 kilometers. It must be said that this value is always based on the profile of the previous driver. The standard consumption is 19.1 kWh/100 km, we came up with 19.6 kWh/100 km during our test drive. And this despite the fact that Genesis does not take part in the aerodynamic battle for percentage points at any price and presents a respectable car with a drag coefficient of 0.29. Finally, there remains the answer to the question asked at the beginning, what happens if the Crystal Sphere does not rotate. Namely nothing. This is the same when the automatic lever is stuck. Then the workshop has to go.