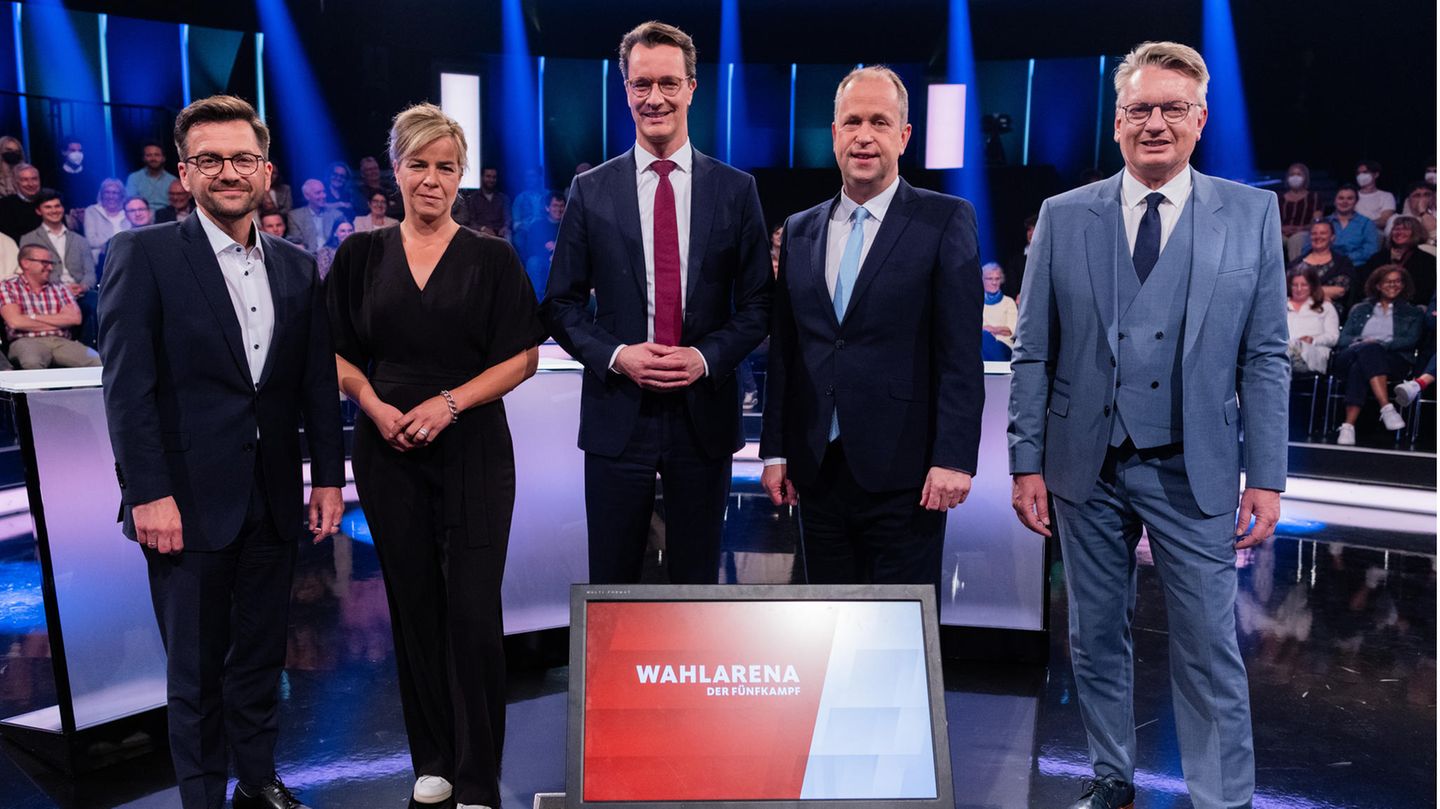 So far, the polls have hardly revealed who will win the state elections in North Rhine-Westphalia. There is a neck-and-neck race between Prime Minister Wüst and SPD man Kuchaty. There are several options for the new government.

It is the summit of the German state election marathon in 2022: when more than 13 million eligible voters are called upon to elect a new government, everyone will look to the most populous state of North Rhine-Westphalia on Sunday. The dice are cast here as to whether the CDU can continue to lead the state government with Prime Minister Hendrik Wüst (46) or whether the SPD – possibly with a bonus as chancellor party – will manage the change of power with the former North Rhine-Westphalia Minister of Justice Thomas-Kutschaty (53).

The surveys of the past few weeks do not provide any clear trend – especially not as far as possible government alliances are concerned. Only one thing is clear from all voter statements: The black and yellow state government therefore no longer has a majority, since the FDP is only seen at 7 to 8 percent (2017: 12.6).

A competition on an equal footing is emerging between the CDU and SPD. Both are around 30 percent each, with the CDU most recently leading by two to four percentage points. The challenger is still relaxed. “The race is very close,” he recently commented on the small deficit. A few percentage points more or less were within the scope of the error tolerance anyway. “You can’t derive anything from that.”

At least the proportion of undecided is still very high. In the ZDF “Politbarometer” the proportion of those who do not know for sure who or whether they are voting is 34 percent. Political scientist Stefan Marschall emphasizes that this could certainly change. “Especially a head-to-head race can mobilize people because you have the impression that every vote can make a difference,” said the Düsseldorf professor of the German Press Agency.

Hendrik Wüst: Prime Minister of North Rhine-Westphalia without an official bonus and with a low level of awareness

As a short-term prime minister, Wüst has no real bonus in office. Just under seven months ago, the then transport minister took over the leadership of the government and the state party from the failed chancellor candidate Armin Laschet.

The level of awareness of Wüst and Kuchaty is not outstanding. Marschall emphasizes that prominent people are particularly important in times when major conflict issues between the CDU and SPD are missing and it is more difficult for the citizens to distinguish what they stand for. “State elections are often personal elections.”

In this respect, Wüst cannot hope for the momentum that propelled Schleswig-Holstein’s Prime Minister Daniel Günther (CDU) to the top last Sunday. Even if he was able to raise his profile in his position as head of government and chairman of the Prime Ministers’ Conference, Wüst’s popularity is far behind Günther’s peak value. Nevertheless, the CDU head of state sees the party friend’s “strong result” as “good signals for us in North Rhine-Westphalia too”.

Forming a coalition in NRW should also take significantly longer than in Schleswig-Holstein. According to the polls, a lot is mathematically possible: from the – highly unlikely – grand coalition to a narrow black-green majority, a traffic light made up of SPD, FDP and Greens to a “black light” with CDU, FDP and Greens. In most polls, it is just not enough for red-green – but this option is not completely out of reach either.

According to the figures, the Greens are likely to become the “kingmaker” with poll values ​​of around 17 percent and could sell themselves correspondingly expensive in probes with the CDU and SPD. Your top candidate Mona Neubaur already presented her “government plans” this week and said confidently that it “may not be so crucial” which man becomes prime minister. “Regardless of the government constellation,” the Greens would ensure change. The top candidates from the CDU, SPD, Greens and FDP do not categorically rule out anything – except cooperation with the AfD.

Open result until the end

Even after counting the votes, a lot should still be open on Sunday. For example, the runner-up could also probe with only a slight deficit with the Greens and FDP. In 2010, Hannelore Kraft had also formed a red-green minority government with 34.5 percent for the SPD, passing Jürgen Rüttgers, although his CDU had received 5882 more votes.

It is doubtful whether the skirmishes intensified in the last few weeks of the election campaign over political affairs or mistakes in dealing with Russian President Vladimir Putin will bring any gains in ground for any of the parties. “Mud fights between parties always have one victim, and that is people’s trust in politics,” warns Marschall. In the past few weeks, both State Minister for the Environment Ursula Heinen-Esser (CDU) and Federal Minister for Family Affairs Anne Spiegel (Greens) resigned as a result of the “Mallorca affair” about vacation and a party during the flood of the century.

There is speculation as to whether Kuchaty can hope for a “Scholz bonus” now that the SPD has appointed the chancellor. Since the federal government has only been in office for a few months, the social democrats could still “take momentum from the federal elections” – accelerated by their absolute majority won in Saarland, says the political scientist. For the SPD in North Rhine-Westphalia, which relies heavily on its closeness to the chancellor, especially in the final sprint, the critical voices about the chancellor’s course in Ukraine are also a risk.

Pandemic: The federal government wants to procure a corona vaccine for the fall

EU Commission: Russian assets could be confiscated for Ukraine's reconstruction

Tariffs: Struggling to agree on tariffs for day-care centers and social work

Russia admits difficulties in the war