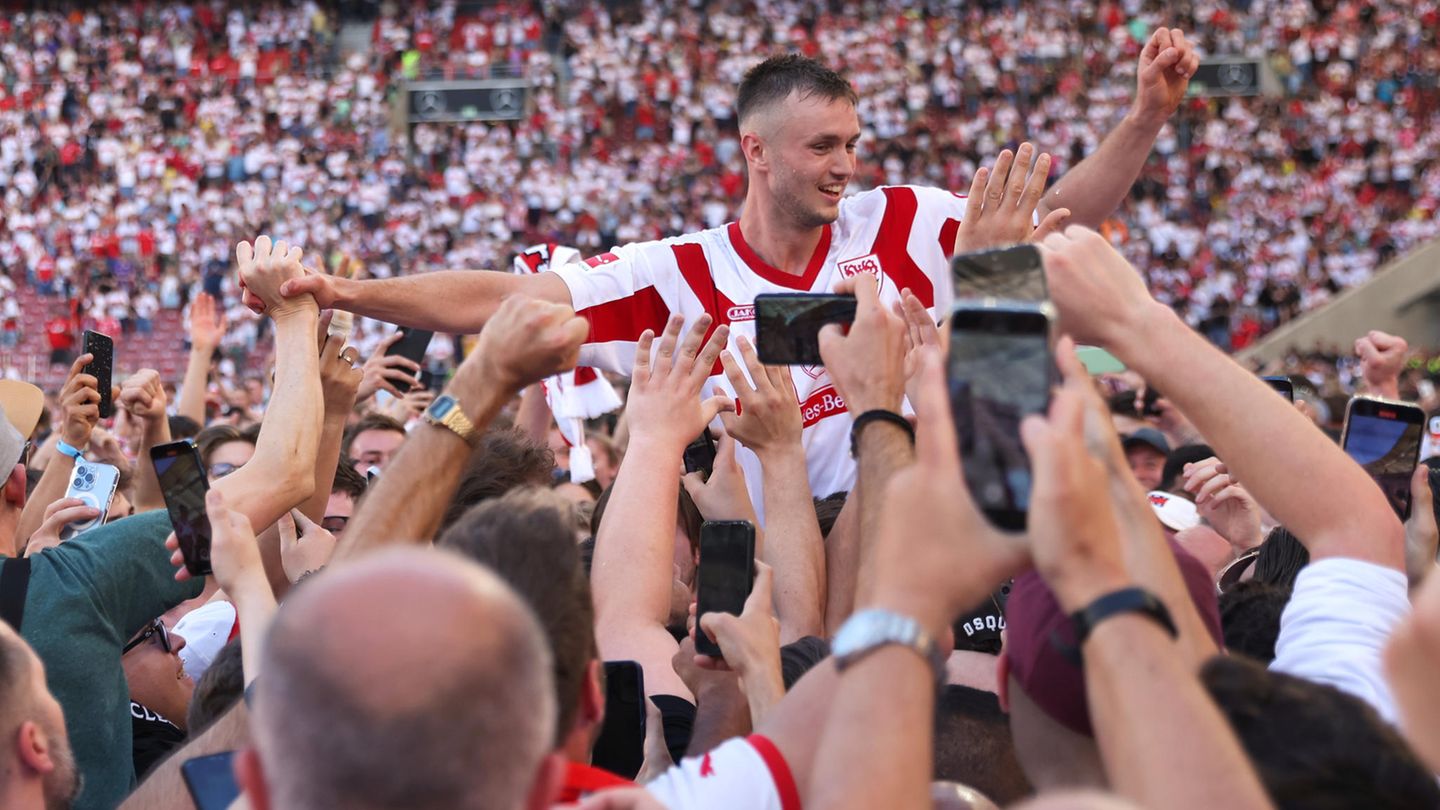 That’s it. The 2021/2022 Bundesliga season is history. FC Bayern became German champions again, that had been clear for weeks. The relegated Arminia Bielefeld and Spielvereinigung Greuther Fürth were also almost certain before the 34th matchday.

Hertha BSC has to go into relegation (May 19 and 23) because competitor VfB Stuttgart scored the winning goal against 1. FC Köln two minutes before the end of the season and Hertha lost 2-1 at Borussia Dortmund at the same time – the dramatic highlight this last matchday

The nine games from the 34th matchday at a glance, you can see the pictures of the matchday in the photo gallery above:

34th matchday at a glance

Arminia Bielefeld, who only had theoretical chances anyway, is after the 1-1 (0-0) against RB Leipzig as the second relegated team alongside SpVgg Greuther Fürth. For SC Freiburg, after the 1: 2 (0: 0) at Bayer Leverkusen, only the Europa League remains, as does Union Berlin, which even moved up to fifth place thanks to the 3: 2 (2: 0) against VfL Bochum . Cologne will play seventh in the Conference League next season.

Eintracht Frankfurt meanwhile got in the mood for the Europa League final on Wednesday against Glasgow Rangers in Seville with a 2-2 (2-1) derby at FSV Mainz 05. In addition, Borussia Mönchengladbach came to a 5: 1 (3: 1) against TSG 1899 Hoffenheim. FC Augsburg defeated SpVgg Greuther Fürth 2-1 (1-1).

Berlin took the lead in Dortmund with a converted penalty kick from Ishak Belfodil (18th). However, BVB equalized through Erling Haaland with a hand penalty (68th). The top scorer made BVB fans cheer once again in the last game before moving to Manchester City. And things got even better for Westphalia when Youssoufa Moukoko scored the winning goal (84′).

So the support for VfB was there – and Endo actually scored the VfB winning goal. The Swabians initially took the lead early on with a goal by Sasa Kalajdzic. The striker, who has been linked with Bayern Munich, scored with a head in the 12th minute after missing a penalty seconds earlier. Anthony Modeste equalized for Cologne (59th).

Bayer Leverkusen celebrated a win with goals from Lucas Alario (54′) and Exequiel Palacios (90’+7′) against a goal by Janik Haberer (88′). Freiburg still had a chance at the premier class, because Leipzig was temporarily behind in Bielefeld due to a goal by Janni Serra (70th). After Willi Orban’s goal (90 + 3), RB had the premier class for sure.

Goals from Grischa Prömel (5′) and Taiwo Awoniyi (25′) put Union Berlin on the road to victory before Simon Zoller (55′) and Eduard Löwen (79′) equalized for Bochum. But Awoniyi gave the hosts the victory (88th).

Tuta (26′) and Rafael Borré (35′) turned the game around for Eintracht at Mainz, who scored a point with two goals from Marcus Ingvartsen (10′ and 50′). Gladbach experienced a conciliatory end to the season with goals from Lars Stindl (26′), Alassane Plea from the penalty spot (44′), Jonas Hofmann twice (45′ and 68′) and Breel Embolo (54′). Hoffenheim took an early lead through Andrej Kramaric (3rd). In Augsburg Daniel Caligiuri scored from the penalty spot (11th) and Michael Gregoritsch (85th) for the hosts, Jessic Ngankam (24th) scored for Fürth.

Excitement in the second Bundesliga

The last match day of the second division on Sunday should be exciting. Fight here from 3.30 p.m. (live on Sky/im star-Ticker) with Werder Bremen, Hamburger SV and SV Darmstadt 98 there are still three teams fighting for promotion. FC St. Pauli only has theoretical chances. Erzgebirge Aue and FC Ingolstadt have already been relegated, Dynamo Dresden has to be relegated.