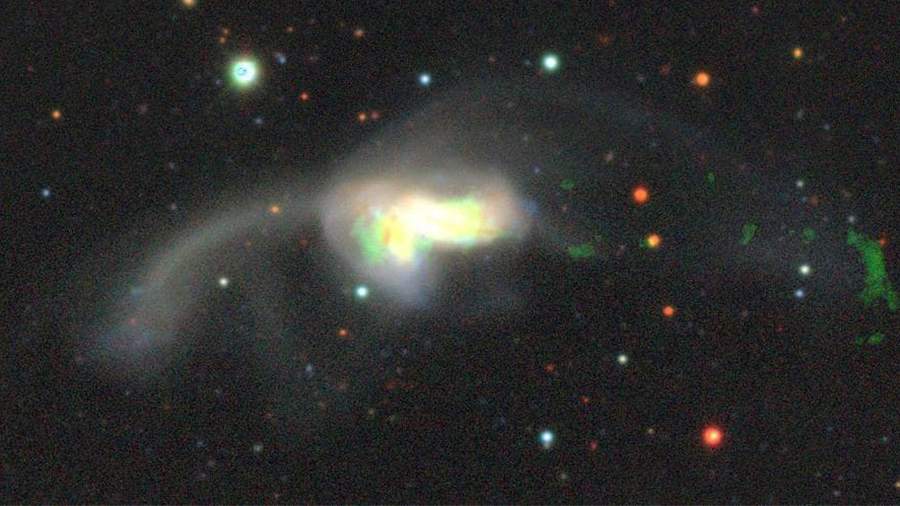 An international team of astronomers has discovered two systems of galaxies that show traces of central black hole activity at giant distances. Both systems are galaxies in the process of merging with a companion, so the discovered structures appear to be a remnant of this destructive process. The results of the study, supported by a grant from the Russian Science Foundation, are at the disposal of Izvestia.

It is believed that at the center of most known galaxies, including the Milky Way, there is a black hole, whose mass can exceed the solar mass by millions and even billions of times. Usually, these giants are in a “sleeping” state, but if there are clouds of dust or gas nearby, the black hole, due to its gravity, captures the matter, forming a rotating disk out of it, shaped like a donut. In such a “donut”, particles of matter rub against each other, heating up to extremely high temperatures, and are also ejected by a black hole into space at near-light speeds. These processes are accompanied by the release of energy in a variety of ranges – from radio to gamma – so the area around the “awakened” supermassive black hole is called an active galactic nucleus.

Radiation coming from the vicinity of a black hole propagates in the form of two wide cones, which are shaped like searchlight beams. If such cones collide with clouds of interstellar gas, they ionize them, turning neutral atoms and molecules into ions. Therefore, astronomers call these structures ionization cones.

According to recent studies, ionization cones can go beyond the galaxy, and their length sometimes reaches hundreds of thousands of light years.

Russian scientists, together with colleagues from the United States, studied 111 nearby active galactic nuclei and 17 galaxies that are in the process of merging.

As a result, scientists were able to detect two very distant ionized clouds in the systems NGC 235 and NGC 5514. The first, NGC 235, is located in the constellation Cetus and is a lenticular galaxy with a companion galaxy, and the second is in the constellation Bootes and is a spiral galaxy in the process of merging with another galaxy.

According to the findings of scientists, the core of the main galaxy NGC 5514 has dimmed at least three times over the past 250 thousand years.

In early 2021, astronomers discovered a system of six exoplanets orbiting a star with a specific orbital resonance. There is no such pattern in any of the known planetary systems, so the find was considered unique.

Astronomers succeeded in making the discovery using a combination of powerful telescopes. First, scientists found three planets, and then they saw the rest. It seemed to unusual researchers that all the planets move in orbits in a coordinated rhythm, that is, they are in resonance. It is known that the fastest planet in the system rotates around its axis for about two days, and the slowest – about 10 times longer.